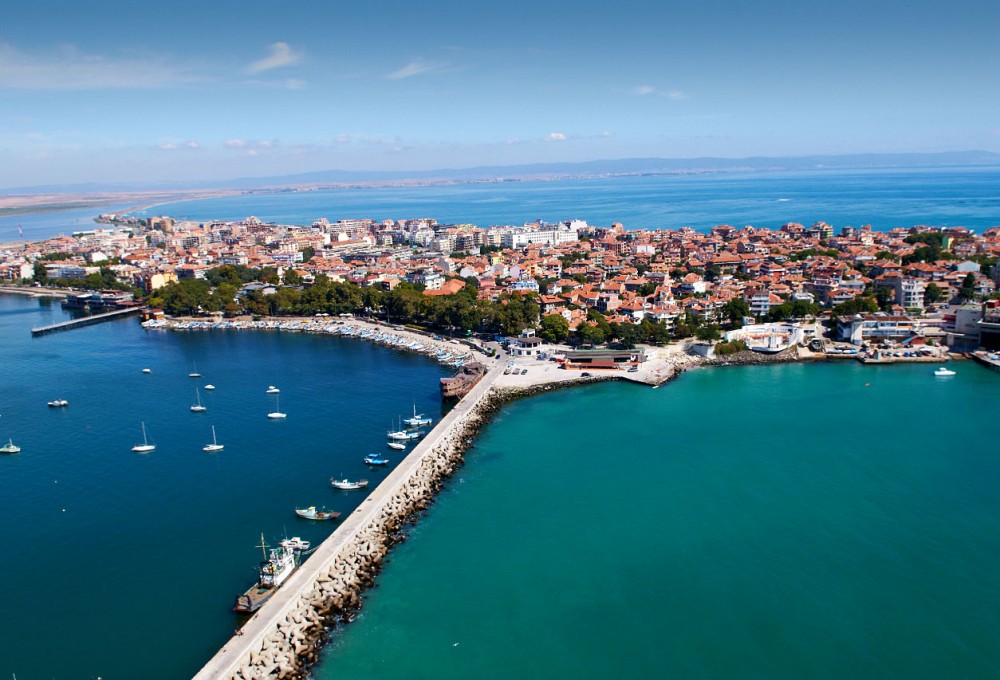 Pomorie is located in the southern part of the Bulgarian Black Sea Coast, 22 km away from Burgas and approximately 400 km away from Sofia. The population of the town is around 14 000 people. E87 main road connecting the northern and the southern parts of the Black Sea Coast passes through Pomorie. Varna, Burgas, Sozopol, and Nesebar can be reached via Pomorie Port. The town lies in close proximity to the international airport of Burgas.
Pomorie is one of the most popular destinations in summer– the average air and water temperature in the month of July is 23.6°С, there are up to 2360 hours of sunshine every year, and the beach is about 5 km long. Winters are mild and with minimum precipitation.
Moreover, the region has been famous for the medicinal qualities of the mud extracted during the production of salt in Pomorie Lake ever since ancient times. The healing powers of the mineral water in the town are also well-known. The slow cooling of the sea water is very typical for the region. In the morning before sunrise the air is rich in ozone, negative ions, ultraviolet rays and iodine released in gas form by seaweed.
The Museum of Salt which follows the development of the salt production industry which has played an important role for the town and the region both in the past and in the present opened doors on the shore of Pomorie Lake in 2002. This is the only place in Bulgaria where salt-mines using ancient salt production technologies continue to operate. Pomorian lye used for the treatment of skeletal and skin diseases is extracted during the salt production process. The museum exhibition comprises a rich collection of photographs, authentic tools and other exhibits. Visitors can make a tour around the functioning salt-mines.
Thanks to the medicinal qualities of its mud, Pomorie has become a popular balneological and SPA resort visited during winter and summer. Nesebar and Sozopol which are famous for their archaeological discoveries and ancient histories are not far away. Slanchev bryag Resort (Sunny Beach Resort) is also close to Pomorie. It provides various forms of entertainment 24 hours a day.