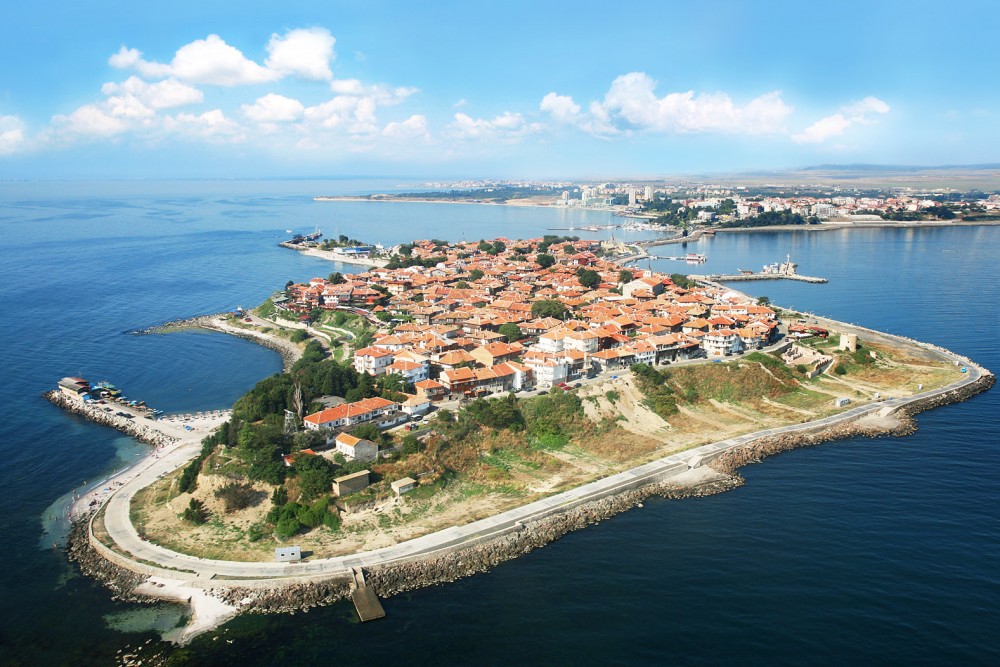 The town of Nessebar is one of the oldest towns in Europe. It is the successor of the ancient Thracian settlement called Mesambria founded in the Second century AD. Its name means town of Melsa. Since 510 AD it was turned into Greek colony town by Dorian settlers. They called it Mesambria and turned it a rival to the town of Apollo for the Black Sea trade. There was a theatre and a temple of the Greek God Apollo in it. Brass and silver money were coined there, and in the third century AD – golden ones. It was occupied in 72 AD by a Roman garrison. The town was of secondary importance during the Roman era. It started to play important role again in III-IV century. Around the year 680 the town was an Episcopal centre, and in VII-VIII century – an important, and strong and protected Byzantine naval base. In the year 812 Khan Krum  conquered the town. In 864 Boris I yielded the possession of the town to Byzantine, but king Simeon captured it again. Since XI century the Slav name Messebar or Nessebar has been used together with the original name Mesambria.
During the Second Bulgarian Kingdom the town rulers were either Bulgarians or Byzantines. The peak of its development was during the reign of king Alexander I when the town was one of the most important centres in the Bulgarian State. The official documents issued in Mesambria gave evidence of donations given to Nessebar for the building of churches and monasteries; according to the legends – more than 40.
The crusaders led by Amedei VI of Savoy captured the town in 1366 and gave it to the Byzantines. The chronicles of Mesambria gave us information about the time when the town was enslaved by the Turks in 1371. The town kept its importance as an important  harbour during the Turkish slavery: ships were built; corns, wood, etc. were exported. After the liberation it was turned into a small fishing town.
In 1956 the town was proclaimed an architectural and archeological reserve. The remnants of an antique fortified wall with a gate dating from III-IV century, the churches from V-VI century and the ones dating from the medieval period (X-XIV century), which are fine works of the medieval Bulgarian and Byzantine architecture, the 60 houses of the revival  period, give the town unique appearance and atmosphere.